The Picton Theatre Group celebrated their 30th Anniversary Year with a production of the famous BBC comedy series Blackadder.

England 1558 - 1603.
The filthy genes of the Blackadder dynasty bubble back to the surface of the melting pot of history as Lord Edmund, arrogant peer-about-town, swaggers back with a big head and small beard in search of grace and favour from stark raving mad Queen Bess.
Accompanied by a small rabble of beruffed riff-raff - bottom-breath Baldrick and pea-brained Percy; the serpentine Lord Blackadder lowers the whole tone of England's Golden Age.
Theatre restaurant shows ran on Saturday evenings August 5th, 12th, and 26th, and September 2nd and 9th.

Blackadder had been a hugely popular show, and had sold out all dinner shows!
Picton Theatre Group also added a Matinee show on Saturday 2nd September at 12noon due to demand.
The costumes were sumptuous, the use of space innovative, and the set peppered with genuine antique furniture and curios. A night of laughs was had by all. 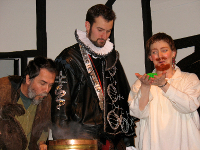